Mater Carmeli School is the first school of the Carmelite Missionairies in the Philippines. It is a mission school dedicated to Our Lady of Mt. Carmel. It envisions itself as a Center of Christian Values and Academic Excellence. As such, it strives to provide opportunities and experiences for students to grow in Christian values and academic competence making them ready to respond actively to the demands and challenges of the rapidly changing society. 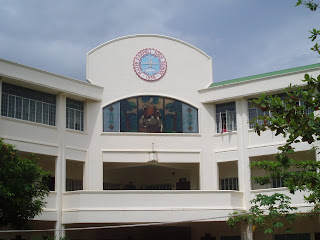 Mater Carmeli School is the former Dingle Academy founded by the late Rev. Fr. Jose Dacudao in June 1951. His aim was to give the youth of Dingle a solid basic Catholic Christian Education, which they would need in the pursuit of their success in life here and in the next life to come. On December 16, 1955, the name
of the school was changed to Dingle Holy Child Academy in honor of the Child Jesus to Whom the founder entrusted its protection and guidance. In 1958, a crisis in enrollment prompted Fr. Dacudao to donate the school and everything that belonged to it to a congregation who could provide the needed help he so desired, and he chose the congregation of the Carmelite Missionaries who came to the Philippines in 1956. And so on May 1958, a Deed of Donation was signed and the Carmelite Missionaries took over the ownership and administration of the school. Consequently, the name of the school was changed to Mater Carmeli High School.

On December 2005, during the 19th Provincial Chapter of the Carmelite Missionaries, a proposal to open a preschool department after two years was discussed and later approved. It was necessary to change the name of the school to accommodate the additional department. Thus, with the opening of the Preschool Department in 2007, and with the approval of the Congregation, the Department of Education and the Securities and Exchange Commission, the name of the school was changed to Mater Carmeli School.

Another milestone in the history of Mater Carmeli School unfolds with the opening of the Primary department in the school year 2009-2010. It is our prayer that our dream of having a complete Basic Education may finally come true. may Our Lady of Mt. Carmel continue to robe Her school with the mantle of Her maternal protection.
Posted by Mazel at 11:06 PM

Email ThisBlogThis!Share to TwitterShare to FacebookShare to Pinterest
Labels: About MCS

New comments are not allowed.